The Data Driven Labs team spent this weekend at WordCamp US in Nashville, Tennessee. What a blast! For those who have not heard of WordCamp, it is a conference for all things related to WordPress. WordCamps are held in cities all around the world each year as local events with WordCamp US at the end of the year. WordCamp US is the national conference, also known as “the big one”.

What makes WordCamps such an amazing events is the people you meet. Sure there are great educational tracks, but, the biggest draw to these camps is the fact you run into the creators and teams behind some of the biggest names in WordPress. For example, we can grab a coffee with the GoDaddy team, or sit and chat with the team behind Yoast. We can even share stories about our teen years with the creator of Gravity Forms. This is why we love being at WordCamps. Everyone is friendly and non-egotistical.

Our team was super excited about what has become known as the “Hallway Track”. This is an unofficial name for the mini-educational sessions that occur between attendees in the hallways and exhibit hall. We were able to connect with several teams and creators of plugins we use such as WooCommerce, Jetpack, Gravity Forms, Genisis Framework, Paypal, Yoast, Monster Insights and many many more. This helps Data Driven Labs create better products for our clients.

While we would love to say we attend every talk, the networking mentioned above took up a good portion of our time. We did, however, attend some amazing talks with some amazing speakers. In particular, our team attended several JavaScript talks as well as a few talks about the future of WordPress and the Gutenberg editor.

This year, Data Driven Labs’ very own Sandy Edwards gave a talk on Kids and Code. This talk was about the best ways to get children involved in code at an early age. There were interesting points and statistics on why parents must get involved since most educational programs are not ready to take on this daunting task.

The State of the Word 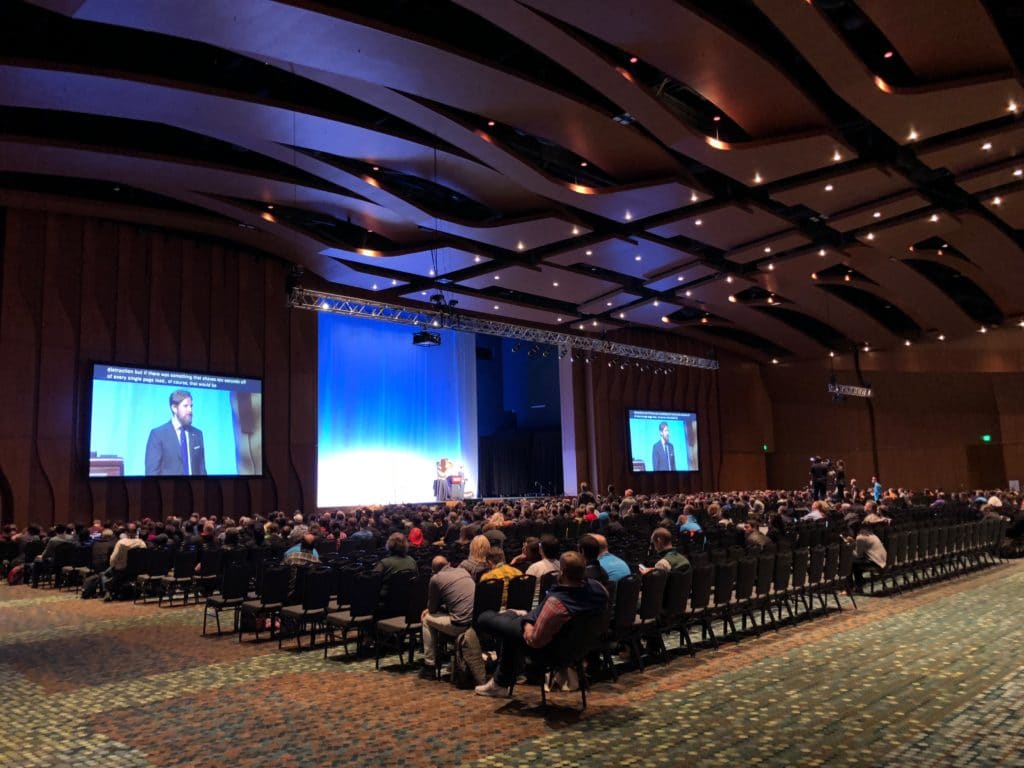 2017 was a big year for the growth of the WordPress community. Thanks to the new “Upcoming Events” widget, WordPress has reached many more, giving a 33% increase in meetup attendance. That means in 2017, year to date, roughly 100,000 people attended 4,379 meetups in over 73 countries! There was also another 128 WordCamps in 48 countries with over 2,310 speakers!

Last year at WordCamp, Mullenweg spoke about SSL security and the Let’s Encrypt project. This project brought free SSL to many hosts, and Mullenweg pushed all hosts to adopt free SSL certificates for their hosting clients. This is one of the many reasons why Data Driven Labs offers free SSL on our hosting packages.

What is amazing is now 36.28% of all WordPress sites are secured with SSL. This is up from just 14% last year. This is a major improvement and is very exciting news!

Gutenberg has been a very hot topic around the WordPress development community. Many have not actually taken the time to really see what Gutenberg is so a live demo was performed. It was amazing how many developers started tweeting about how their minds have changed and how they are now excited about this new project.

#StateoftheWord at #WCUS was different in years past, but that live demo was a happiness bringer. I am excited for the possibilities that Gutenberg brings to clients.

Gutenberg will change the editor of WordPress that has been the same for many years. It will create blocks that can be styled giving users more control over how their site looks. As I write this very post, there are many items in Gutenberg that would make the styling of this post much easier to pull off especially with image galleries.

The controversy is not fully gone. This became clear during the question and answer time. Many are still fearful of outdated plugins and themes not being able to support this new system. There will be a “Classic Editor” plugin which will keep the default editor, however, is unknown how long that will last. The Data Driven Labs team will carefully watch the rollout of this new feature and make sure all our client’s sites are ready and provide proper training to all clients.

"This will work for at least a little while."

Gutenberg is said to be launching around April of 2018. There was fear it would roll out at the conclusion of WordCamp US this year, however, the Gutenberg team feels they will need a few more months to get it just right.

The After Parties & Networking Events

What’s a conference without networking events and after parties? WordCamps never disappoint in this arena. On Friday night, Data Driven Labs was invited out to the WP Engine WordCamp Event. This was an amazing event! This event was held on the “Nashville Strip” in a place called “The Honky Tonk”, very fitting for Nashville. We had an entire floor where there was a live band playing country hits, ice cubes that lit up and an open bar. While all those things were great, the best part was the people. We had a full night of conversations and networking. What an amazing event.

While the WP Engine event was great, the official WordCamp Afterparty did not disappoint. For the official afterparty, WordCamp US booked out the Nashville Adventure Science Center. Yes, an entire science center open just for a bunch of geeks and engineers, what could be better than that.

After a full camp, this was a time that adults were able to embrace their younger side. There was the “Adventure Tower” which looked like it was for kids, complete with crazy ladders and slides. Yes, even as adults with bad knees and major cases of carpal tunnel syndrome, many of us made the full climb to the top, and then took a twisty slide down 2 stories to the bottom. The amount of joy I saw on everyone’s faces really showed that the inner kid in you will never grow up, and, even business people need to let it out sometimes!

This event was amazing, we had a planetarium show, some karaoke (which I did not sing in for the benefit of others) and plenty of food and drinks. Just as with any event at WordCamp, everyone spent their time networking and learning new things about WordPress, and then sliding down a slide when they were done!

Chris is Co-Owner of Data Driven Labs and a 17-year internet marketing expert in web design & development, SEO, digital marketing, and analytics. He often speaks at conferences around the world on everything WordPress and analytics.

This post contains affiliate links to products and services we recommend. If you make a purchase through one of those links, you won't be charged a penny more, but, we will receive a small commission or credit for your purchase. No personal information is passed back to us.